Films are screened five to seven nights a week in the beautiful and historic Willard Straight Theatre (pictured) during the academic year. Built in 1925, the theatre features fresco wall murals depicting Shakespearean scenes on one side and scenes from Greek classical theater on the other. Occasional screenings are held in Sage Chapel and outside on the Willard Straight Terrace. 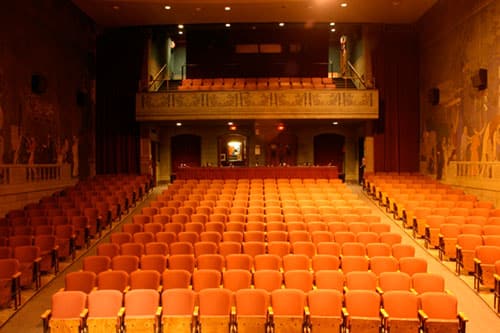 Willard Straight Theatre features the largest screen in Ithaca, Dolby Digital Surround Sound and the best projection in the area, with facilities to handle archival 35mm reel-to-reel prints, DCP (including high quality 3D), and other digital formats. 16mm prints can also be accommodated with portable projectors. A concession stand in the lobby sells reasonably priced popcorn, beverages, candy and organic snacks from Temple of Zeus. Seating capacity is 340.

Cornell Cinema hosts one or two special events each semester in Sage Chapel. This magnificent, non-denominational chapel was designed by Charles Babcock, Cornell’s first professor of architecture, in 1875, with additions to the building in 1898, 1905 and 1940. There are Tiffany windows, memorial windows to war veterans and one to the civil rights workers murdered together during the Freedom Summer of 1964: Michael Schwerner '61, James Chaney, and Andrew Goodman.

Sage Chapel also features Cornell's largest organ, an Aoelian-Skinner installed in 1940, which sometimes features in our screenings there. Seating capacity is 748. 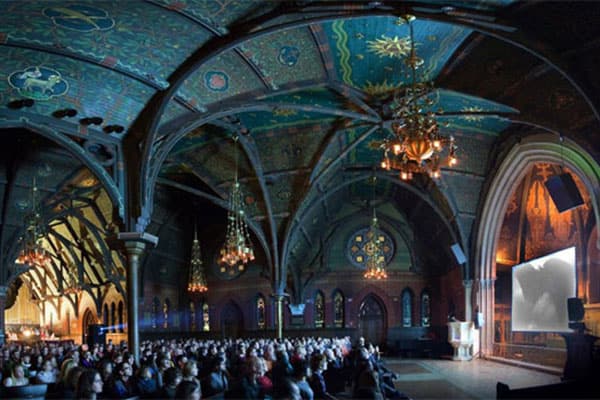 There are many parking options for Cornell Cinema screenings. 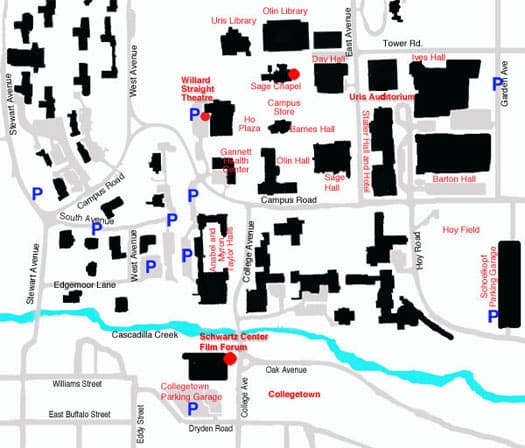 Parking is also available at the Schoelkopf Parking Garage, where there is ample space and it is free after 5pm. It's a less than 10 minute walk to Willard Straight.

Please pay close attention to all parking signs in case of any rule changes!