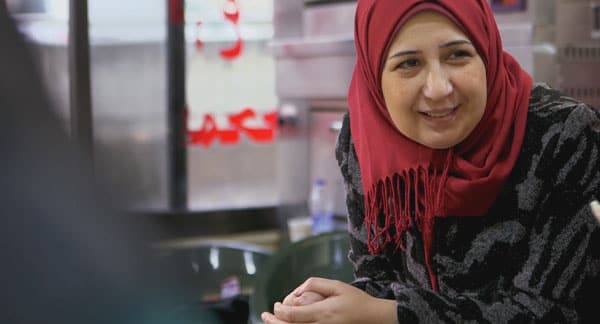 Soufra follows the unlikely and wildly inspirational story of intrepid social entrepreneur, Mariam Shaar—a generational refugee who has spent her entire life in the Burj El Barajneh refugee camp just south of Beirut, Lebanon. The film follows Mariam as she sets out against all odds to change her fate by launching a successful catering company, “Soufra,” and then expand it into a food truck business with a diverse team of fellow refugee women who now share this camp as their home. Together, they heal the wounds of war through the unifying power of food while taking their future into their own hands through an unrelenting belief in Mariam, and in each other. In the process, Mariam is breaking barriers, pulling together Syrian, Iraqi, Palestinian and Lebanese women to work side by side and form beautiful friendships while running this thriving business.

In Arabic with English subtitles. Cosponsored with the Ithaca Palestine Film Series.