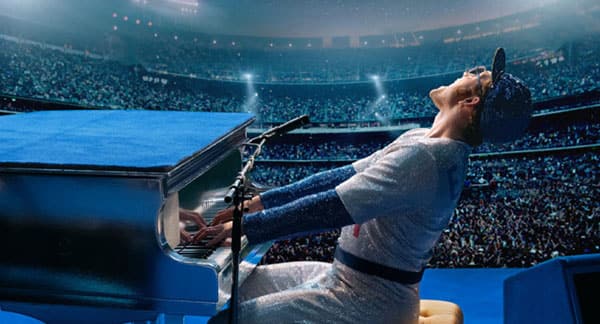 “‘When are you going to hug me?’ That question echoes around Dexter Fletcher’s dazzling rock opera—a fantastical account of the highs and lows of Elton John’s wild-ride rise, told in frenetically full-blooded musical form. …unlike the problematically rejigged chronology of Bohemian Rhapsody (which Fletcher rescued from disaster), this proudly nonlinear treat puts its jukebox soundtrack on shuffle, wittily deploying tunes to fit the mood rather than the timeline. The result is a riotous fact-meets-fiction swirl… all tied together by a barnstorming central performance from Taron Egerton.

“From an early snog with a 1960s soul-revue musician to a cherry-popping sex-scene played out to the strains of Take Me to the Pilot, there’s none of the coyness that won Bohemian Rhapsody a family-friendly PG-13 rating in the US. This is altogether more frank fare—and all the better for it. Yet despite the carnivalesque bustle of sex and drugs, the real centre of the drama is a low-key love story (albeit ‘not in that way’) between John and Taupin.” (The Guardian)