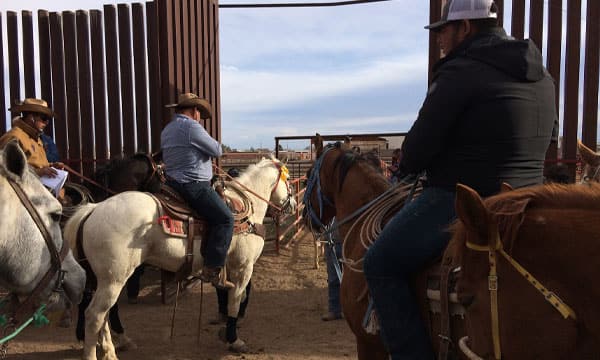 “History haunts the border town of Columbus, N.M. when Mexican riders on horseback cross the line to commemorate Pancho Villa’s 1916 raid. As border dwellers and their divergent accounts of the Villa raid are introduced, the more subtle work a borderline does in shaping their lives comes into focus.” (Ashland Independent Film Festival) A special Central New York regional screening.

“I was born in the Southwest. From a landscape I know well, and through the lens of history, this film's story is told. At the height of the Mexican Revolution, Pancho Villa raided Columbus, N.M. Every year, the town’s commemoration of the raid opens old wounds. After decades of repetition, this story has come to shape the town’s identity. In today’s climate, crossing the border between the US and Mexico in a ceremony of bi-national reconciliation is as exceptional as it is inevitable. My visual perspective fashioned over 25 years of hybrid film-making combines pristine archival material of the raid and the US military expedition which followed it with a camera that observes its present-day interlocutors from an intimate distance. I spent months with these border dwellers. Each of their stories about Villa dovetails with those of their own life in the borderlands to create a crucial, timely portrait of the US/Mexico border.”

Filmmaker Cathy Lee Crane has been charting a speculative history on film since 1994, and in 2013, was awarded a Guggenheim Fellowship for her lyrical re-combinations of archival and staged material. Her body of work enjoyed its first survey in 2015 as part of the American Original Now series at the National Gallery of Art. Crane’s award-winning films (which include the experimental biographies Pasolini’s Last Words and Unoccupied Zone: The Impossible Life of Simone Weil) have screened at Viennale, San Francisco International Film Festival, Festival du Nouveau Cinema, Cinematheque Francais, BFI, and Arsenal/Berlin and are distributed by Canyon Cinema, Lightcone, and Films Media Group.

Her first feature-length fictional hybrid The Manhattan Front (2018) premiered at SFIndie Fest in 2018 with a profile in Filmmaker Magazine. Crossing Columbus, a feature-length documentary about the border town of Columbus, New Mexico was supported by the Rockefeller Foundation Bellagio Center Residency and the El Paso Cultural Foundation. Her engagement with the history of the US/Mexico border will continue as a 2021 Residency Fellow at the Harun Farocki Institut in Berlin, where she will prepare an installation of Drawing the Line, a film series presented at the 2019 Poetics and Politics Documentary Research Symposium at UC Santa Cruz.

Crane is Associate Professor in the Department of Cinema and Photography at Ithaca College.