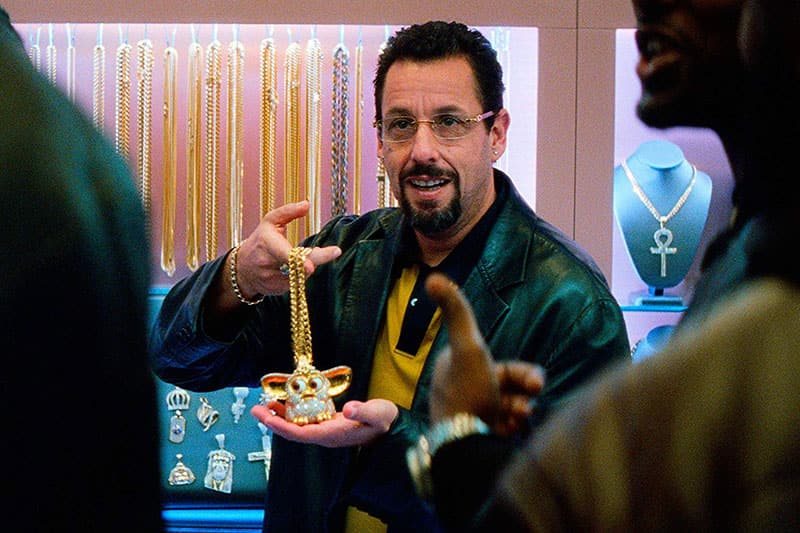 “On the heels of their propulsive Good Time, the Safdie Brothers raise their game with another unhinged New York odyssey coasting on the sweaty highs and lows of a hapless protagonist and the frenetic pace of a city spinning out of control. In a rapid-fire, revelatory performance, Adam Sandler is Howard, a diamond dealer whose life is reaching a crescendo of manic desperation: his relationship with his wife (Idina Menzel) is imploding; he owes a hefty chunk of money to angry racketeers; and he’s getting in over his head in an ever escalating scheme to make a fortune by selling an Ethiopian opal to Boston Celtics forward Kevin Garnett (playing himself in a terrific dramatic acting debut). Nothing goes as planned, of course, and that’s the fun and the terror of this wild ride that pushes viewers to the breaking point of pleasurable anxiety.” (New York Film Festival)

“The Safdies have crafted a complete experience here: A pointed critique of the ‘American Dream,’ a wry portrait of Jewish assimilation in the 21st century, a cautionary tale about gambling addiction (that also doesn’t shy away from showing how seductive sports betting can be), and an unflinching character study centered around the best performance of Adam Sandler’s career.” (ScreenCrush)