with filmmaker Malena Szlam in person 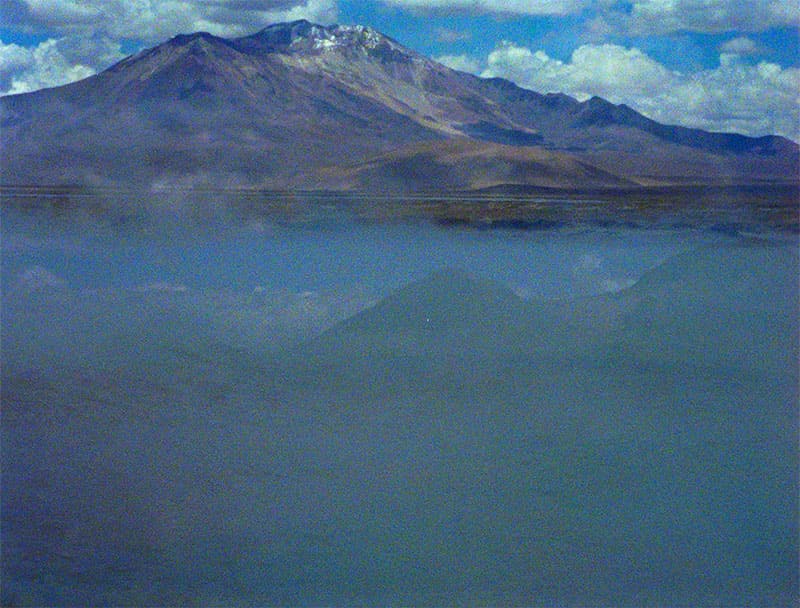 Malena Szlam is an artist and filmmaker working at the intersection of cinema, installation, and performance. Her practice explores the relationship between the natural world, perception, and intuitive process. The poetics developed through her time-based works and in-camera edited films engage the material and affective dimensions of analogue film practice. “Malena Szlam’s Altiplano (2018) ranks among the most striking landscape films of recent years and, indeed, calls for a revision of how we talk about landscape in cinema.” (Film Comment)

2008, 35mm to digital, colour, silent, 6:00 min., Chile/Canada
Chronogram is a photomontage that explores stillness, motion, and memory. Using a 35mm still camera, multiple exposures were composed and edited in-camera, creating frameless sequences of images printed on 35mm filmstrips. When projected, these images become a non-linear, non-synchronized collage. The ephemeral quality of the images—their transparency, layering, and repetition—invites us to reflect on the role memory plays in perception, the ways we mentally reconfigure fragments to construct stability and meaning in an environment of perpetual flux.

2010 – 2011, Super 8mm, color, silent, 10:00 min., Chile/Canada
Like notes written in a diary, Rhythm Trail is an open-ended film composed of a series of Super 8mm sketches edited in-camera. These collected notes are traces of moments and places that reflect on the immediacy of sight.

2010, Super 8mm to 16mm, color, silent, 3:40 min., Canada
Beneath Your Skin of Deep Hollow translates night and water into arrhythmic movements of light in a fugue of colours. Shifting impressions emerge on the surface of an agitated stillness, while darkness illuminates reflections and sight.

O mirror!
Cold water by weariness frozen in your frame,
How many times and during many hours, desolate
By dreams and seeking my memories which are
Like leaves beneath the deep hollow of your ice,
I saw myself in you like a distant shadow,
But, horror! Some evenings, in your harsh pool,
From my scattered dreams I have known nakedness!
– Stéphane Mallarmé, Hérodiade.

“Lunar Almanac initiates a journey through magnetic spheres with its staccato layering of single-frame, long exposures of a multiplied moon. Shot in 16mm Ektachrome and hand processed, the film’s artisanal touches are imbued with nocturnal mystery.”
—Andréa Picard, TIFF Wavelengths, 2014

Lunar Almanac traces the observational points of the lunar cycle in a series of visual notations. Using single-frame and long-exposure photography, the unaltered, in-camera editing accumulates over 4000 layered field views of half-moons, new moons, and full moons. These lunar inscriptions flit across the screen with a frenetic energy, illuminating nocturnal reveries that pull at the tides as much as our dreams.

2018, 16mm, color, silent, 5:30 min., USA, Canada
Morphology of a Dream is a visual study of the rhythms of sleep cycles during the phase of rapid eye movement. Filmed in the forest in Colorado, Morphology explores an oneiric world that expresses place and memory in a fleeting succession of colors and sensations hovering between the “real” and abstract worlds.

2018, 35mm, colour, sound, 15:30 min, Chile/Argentina/Canada
Filmed in the Andean Mountains in the traditional lands of the Atacameño, Aymará and Calchaquí-Diaguita in Northern Chile and Northwest Argentina, Altiplano takes places within a geological universe of ancestral salt flats, volcanic deserts, and coloured lakes. Fusing earth with sky, day with night, heartbeat with mountain, and mineral with iridescent cloud, Altiplano reveals a vibrating Ektachrome landscape in which a bright blue sun forever threatens to eclipse a blood-red moon.

Coupled with an entirely natural soundscape generated from infrasound recordings of volcanoes, geysers, Chilean blue whales and more, Altiplano makes use of in-camera editing to create evocative visual rhythms through the ecstatic clash of color and form. Landscapes pulse and stutter, transformed through complex 16mm pixelation and superimposition techniques into spaces that exist in a multitude of times simultaneously. Located at the heart of a natural ecosystem threatened by a century of saltpeter and nitrate mining practices and recent geothermic exploitation, Altiplano reveals an ancient land standing witness to all that is, was and will be.