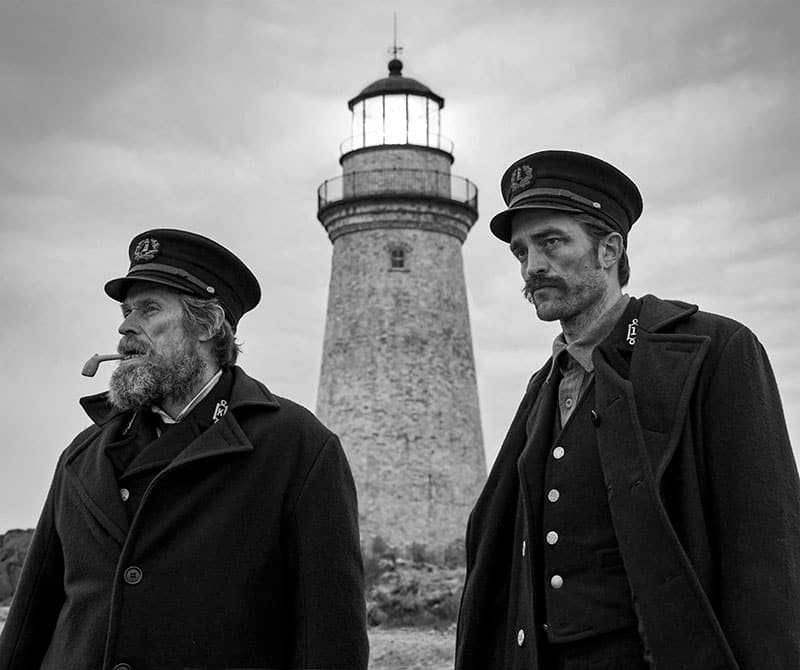 This brooding, atmospheric gothic thriller about two lighthouse keepers trapped on a remote island from director Robert Eggers (The Witch) is receiving raves for Dafoe and Pattinson’s intense performances. “It is explosively scary and captivatingly beautiful in cinematographer Jarin Blaschke’s fierce monochrome, like a daguerreotype of fear. …Very few films can make you scared and excited at the same time. Just like the lighthouse beam, this is dazzling and dangerous.” (The Guardian)

“The Lighthouse… is a ferocious battle of wills, a tour de force of cold, clammy suspense and a protracted descent into cabin-fever madness. It is also a gorgeous piece of film craft, a chance to savor the visual glories of a bygone era of cinematic artisanship: a boxy aspect ratio, a black-and-white palette bathed in expressionist shadows, the rich textures of 35-millimeter celluloid. …Dafoe is too marvelous and inventive an actor to be bound by clichés, and his performance is the movie’s most memorably imposing creation—a thing of pungent wit and rude, rum-soaked vitality. …Dafoe may have the showier role, but it is the beautifully brooding Pattinson, eerily channeling a young, mustachioed Robert Mitchum, who has the tricky task of steering this two-hander into a full-blown psychological tempest.” (LA Times)

Jarin Blaschke is nominated for an Academy Award for Cinematography. The Lighthouse is also nominated for 5 Independent Spirit Awards, including Director, Best Actor (Pattinson), and Best Supporting Actor (Dafoe).