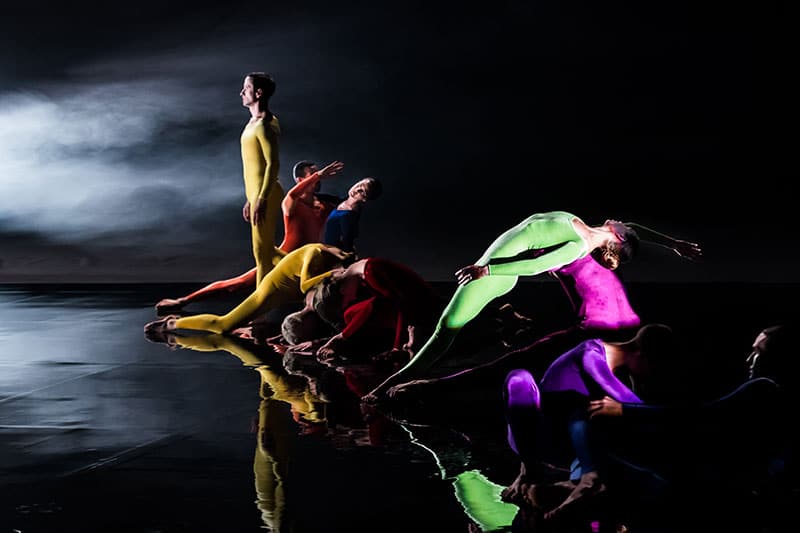 Merce Cunningham upended modern dance aesthetics working in collaboration with other giants of the American avant-garde such as John Cage (his life partner), Robert Rauschenberg, John Jaspers, and Andy Warhol. Cunningham explores the formative years of his work with “a breathtaking explosion of dance, music, and never-before-seen archival material.” (Magnolia Pictures)

“Behind Cunningham’s pioneering compositional methods… lies a craftsman whose precision, rigor, and imagination could take your breath away. This is the Cunningham that Kovgan offers up, in vivid three dimensions. Kovgan has filmed these dances—or rather fragments of dances—in a series of locations, mostly in Germany, each dramatic in its own right: a forest in Saxony, a subway tunnel in Hamburg, a rooftop in New York… What surprises here is how at home Cunningham’s dances appear, whether they are shot outside in a grove of slender firs, in the gilded hall of a palace, or in an airplane hangar. A dancer’s foot dragging through the dirt sends a chill up your spine. Or you chuckle as a dancer, carrying a chair on his back, traverses a platform in the courtyard of a mansion. ……Cunningham explains the madness that is a dancer’s devotion to dance, the daily toil and repetition and sheer work involved. ‘Inside of all that is an ecstasy, brief perhaps, not always released,’ he says. Cunningham tapped into that feeling—and in Kovgan’s film, it shines from every frame. (New Yorker)

“The use of 3D lends an immediacy to the dances and highlights the dancers' physicality—the muscled weight of their bodies, but also their gravity-defying pliancy and lightness.” (Hollywood Reporter)