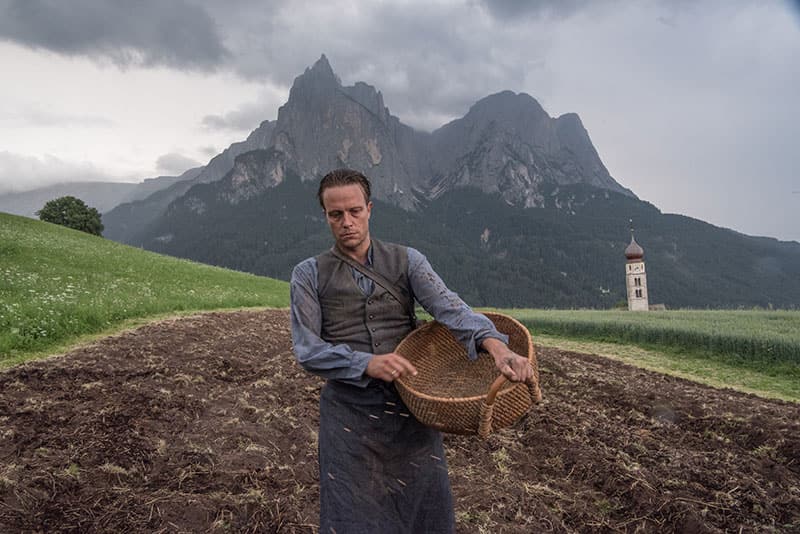 Based on true events, Austrian farmer Franz Jägerstätter, faced with execution for refusing to fight for the Nazis, relies on his faith and love for his family to resist, in the latest film from visionary director Terrence Malick.

“His extraordinarily beautiful and wrenching new movie is called A Hidden Life, a title that sounds an echo of The Tree of Life, which may be more than mere coincidence: If that 2011 film was Malick’s most personal and autobiographical work, then this one feels like a decisive return to roots. It’s at once a linear, almost classically structured drama and an exploratory, intensely romantic work of art.… Pushing plows, threshing wheat and taking care of livestock is hard work, but Franz (a haunting August Diehl), a man of joy and contentment, also loves chasing and playing with his wife, Fani (Valerie Pachner) and their three young daughters. But the family’s deep ties to the land and the surrounding community are disrupted when their fellow villagers take up the call of ‘Heil Hitler,’ submitting freely to the grip of a murderous totalitarian regime. When a local bishop urges Franz to submit as well, he makes a decisive break with the church—though not, crucially, with God, whom he continually presses and wrestles with in prayer.” (LA Times)

“A sombre spiritual war epic which surges up to claim its place among the director’s most deeply felt, sturdily hewn achievements.” (The Telegraph)

Nominated for an Independent Spirit Award for Best Feature Film.