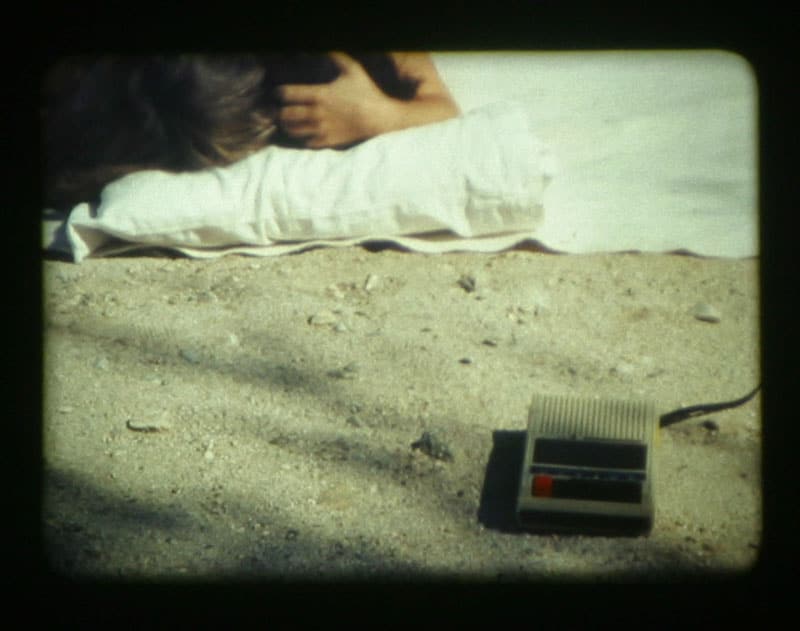 Laida Lertxundi was born in Bilbao, Spain, and makes 16mm films primarily in and around Los Angeles, where she has lived and worked for more than a decade. Her work is intrinsically and inextricably connected to the California landscape and psyche. Beautiful and enigmatic, her 16mm films bring together ideas from conceptual art and structural film with a radical, embodied, feminist perspective.

Footnotes to a House of Love (2007, 16mm, 13 minutes) (second picture above)
“A hut in the middle of the desert. Some young people enter and exit the hut, take down its doors and windows, converting it into an open space. The dichotomy between inside/outside disappears; destruction leads to creation; freedom prevails as a radiant form of life. The relationship between what we see and what remains out of view, between image and sound, is of a purely natural, organic nature: Laida Lertxundi never deceives. With Footnotes to a House of Love, the filmmaker inaugurates her cycle of films made in Los Angeles and the surrounding areas, and she does so laying down the (visual and musical) constants that are to define her subsequent works. As from this time, her footsteps on Californian soil and the impression they will leave on experimental cinema will be indelible.” (Javier Estrada)

Cry When It Happens // Llora Cuando Te Pase (2010, 16mm, 14 minutes) (first picture above)
Los Angeles City Hall is reflected onto the window of the Paradise Motel. It serves as an anchor for this traversal through the natural expanse of California. Here, we discover a restrained psychodrama of play, loss, and the transformation of everyday habitats. Music appears across the interiors and exteriors and speaks of limitlessness and longing.

The Room Called Heaven (2012, 16mm, 11 minutes)
American plains and high altitudes assembled in a B-roll structure take us to a place of sounds. Plans américains show color and temperature shifts while an emotional room tone is sustained for the length of a 400ft camera roll.

Live to Live // Vivir para Vivir (2015, 16mm, 11 minutes)
A certain trajectory of being lost is drawn across sparsely populated mountain regions while physical processes from heartbeat to orgasm shape image, sound and color patterns until the horizon is reached. With original sounds and music by Ezra Buchla, Albert Ortega, Laura Steenberge and Tashi Wada.

025 Sunset Red (2016, 16mm, 14 minutes)
025 Sunset Red is a kind of quasi-autobiographical reckoning. An indiscernibility of then and now. Recollection and immediacy. Delicacy and virility. The elusive and the haptic. The Basque Country and California. It’s a set of echoes of an upbringing by communist radicals, not as nostalgia but as a way of making sense, of finding practical applications of the past in the present. Within the film, blood is collected and poured, red filters cover landscapes, and images of desire are both produced and observed. The film is a diaphanous, psychedelic foray into the domestic and the political, looking at ways that politics may erupt, shape a life, form a sensibility, and become inscribed upon a body.

We Had the Experience but Missed the Meaning (2014, 16mm, 7 minutes)
Between Los Angeles and San Diego, California, a moment in a story by Bioy Casares finds a man who prefers driving to making love to Veronica. Crossing desert and sea, screen and page, we pass over that which cannot be said, only shown.

Cosponsored with the Dept of Romance Studies & the Cornell Council for the Arts.